Here is an introduction to lessons at CGK Afterschool

One of the Project Works over a two-month period is a course called "Student Choice."
In this course, the children think up both the theme and the plan for their study, and learn in depth by focusing on their interests at the time.

The theme of this lesson is "Cooking."
"How can we make healthy and original food and snacks?"

Here are some comments from Ms. Kitty and Ms. Heather who were in charge of the program. 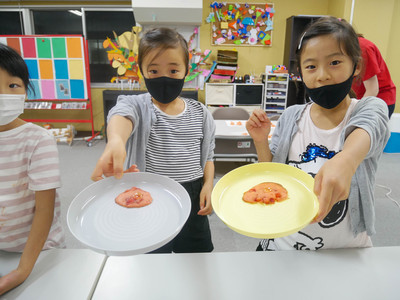 Week 1 - Heather
The children started their project by having one student explain what Student Choice is. They shared their experiences so far.
The students decided to just talk in one group, after voting about splitting or staying together, about their ideas. One student took charge of recording their ideas. Then, they decided that they should vote on the ideas by choosing their top three. The teacher suggested that they also add a X spot for the one they didn’t want to do. They said that the first three choice were one point each and that the X was -1 point.
After doing the secret vote the children checked the results with the teacher. The teacher asked about grouping some of the results (concert, English show, puppet show, magic show became show & art house, house, castle with dot paint because house). They ended up with Show (4), House (5), Cooking (5) and Animal Research (1). The teacher asked them to think about some things we can learn about these, and we will discuss them during week two. Next week we can have a second vote.

Week 2 – Kitty
The students reviewed what they had discussed in Week 1 and shared which topic they wanted to explore and how. Students wanted to learn about food and cooking. They began to brainstorm different ideas of what they wanted to learn (such as making cookies or pasta with meatball) and came up with two ideas: learning to make food and making a CGK restaurant. We asked the students to decide which route they wanted to explore as it would be too vast to cover everything, so they decided and chose to learn about making food. We then discussed key points about food which they were interested in investigating, to help come up with a leading question for the project, and the students came up with “healthy and original” which led to the question of “How can we make healthy and original food and snacks?”. Once they had thought of the leading question, they started thinking of original meals which they would like to try and make. The students shared their ideas with each other and will present the food/snack ideas to the rest of the class in Week 3.

Week 3 – Heather & Kitty
The children who were there last week shared what they did with everyone this week.
The children had difficultly deciding on what they wanted to do but, after some encouraging from the teachers, they were able to come up with the idea of using colors as their theme for their food items. The teachers let the students know what the timeline would be:
Week 1-3 Discussion
Week 4-5 Research & deciding what to make. Include drafting a letter to school director about the materials
Week 6-8 Cooking and maybe blogging
Week presentation
The children then discussed about how to incorporate the theme. Some children wanted a red theme, some wanted yellow, and some didn’t care either way. One of the teachers suggested using red, yellow, and orange as the theme. The students agreed.
They expanded on the theme by thinking about if they would use all of the colors in each dish (sweet, savory, and a drink) or one color per dish. They decided on using all of the colors and then went to think about different ideas for recipes. Three children brainstormed using just their imagination while the other three looked at some photos for ideas.
At the end the students shared what they had come up with so far.

Week 4 – Heather & Kitty
The students explained to Tsukiho on what the project for Kid`s Choice is and explained how the dishes need to have the 3 colors (Red, Yellow and Orange).
The teachers told the students that we would be going to the supermarket to see how much the different ingredients cost, as well as to see whether there are more ingredients that they couldn`t think of for each color.
The students were divided into three groups and allocated a color to look for in the shop and each teacher would stay with one group. In the supermarket the students were all able to find most of the ingredients on their lists and additional items of their color, and documented the unit and price very well.
Once we came back to the school we sat down, and they all shared what they were able to find and they started to discuss what ingredients they would like to use in the drink. Everyone was voicing whether or not they liked certain ingredients/flavors and managed to decide on the 3 color components: Apple juice (with orange food coloring), tomatoes, bananas. The students all drew designs of the drink.

Week 5 – Heather & Kitty
This week we started project work early because there were many things that needed to be done.
We started by talking about how we want to share what we are doing in the class. They talked about the idea of making posters, charts, or a video. The class decided that making a video would be the most interesting for them and they will share how they feel about each dish that they create.
We continued by discussing what to do for our savory project. The teachers outlined pastry, pasta, and sandwiches (bread) as potential themes for our savory dishes and the children voted on which one they were interested in.
After deciding on pastry, in the form of pasties, the students listed the savory ingredients for red, orange, and yellow. The students then voted on the ingredients that they were comfortable trying or that they liked and decided on the filling for their pasty.
We repeated this process for the sweet item by starting with cake, cookies, scones, or pancakes as the base. The students were able to decide on cookies for the base and the ingredients that they needed.
After deciding on what they were going to make and what would be in each item, the children broke into three teams and started drafting proposals to present to Ms. Saeda about how much money they would need for their dishes.
They were asked to write out a paragraph and to calculate the amount that they would need based on the grocery store visit.
Two of the groups (drink and sweet) were able to finish and presented their proposal for approval and will be looking forward to hearing a reply next week. 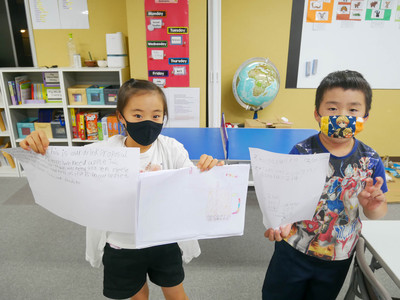 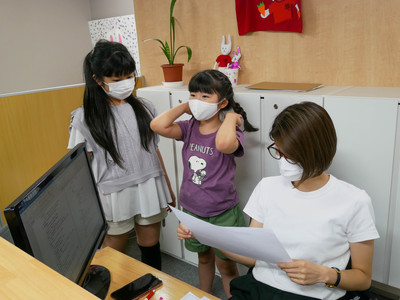 Week 6 – Drinks
This week the students were making their drink course and needed to decide on a name. Everyone was happy with the name CGK A.B.T Special Juice (Apple, Banana, Tomato).
Once the name was decided the students had to decide on allocating the roles of: washing the tomatoes, cutting the tomatoes, peeling the bananas, cutting the bananas, pouring the juice.
The students then had to think about how they would like to document their experience of cooking and tasting the drink and decided they wanted to take photographs, record movies, and make posters with pictures.
After setting up the classroom, the students washed their hands and put on gloves to wear while touching the foods. The students paired up for the jobs and worked well together, safely handling the foods and cutting tools.
Once the ingredients were cut, the students individually assembled their drinks and were able to choose the amount of banana and tomato they wanted.
When everyone had their drink made, they took it in turn to use the blender to mix their drink, with the support of a teacher.
After everyone had blended their drink, they all tried the CGK A.B.T Special Juice at the same time. The students gave their feedback to the camera how they found the taste and texture, and marked it out of 10. Five students marked it 10 out of 10, one student marked it 7 out of 10 and one students marked it 5 out of ten. 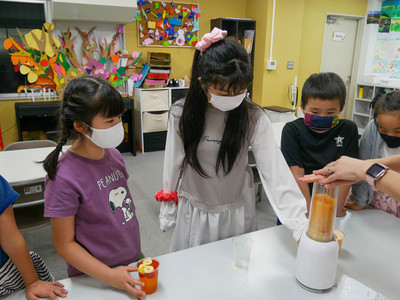 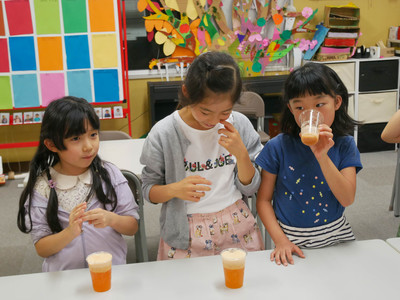 Week 7 – Sweet Dish
This week the students focused on their sweet drink. They discussed the recipe that was written on the board and decided on who would do what.
The children took turns using the scale to weigh the ingredients and preparing the batter.
Once the batter was prepared, the students divided the batter into their individual bowls and added the strawberries and honey as they liked. This allowed them to customize the batter in their own way.
After that, each student added one cookie to the tray to bake. Once the first batch was done and the next one was in, the students tried their cookies and gave feedback. They all decided that it was a success.
Afterwards, we cleaned up and then discussed how healthy or unhealthy everything had been so far. They concluded that the drink was healthy but that the cookies were not due to the amount of the sugar and butter.
At the end of the lesson, the children were able to try a few more of their cookies. They are looking forward to creating their poster next week.
In addition, during the day the students were able to work on a poster for the drink that they had made last week and the savory proposal team finished their letter. 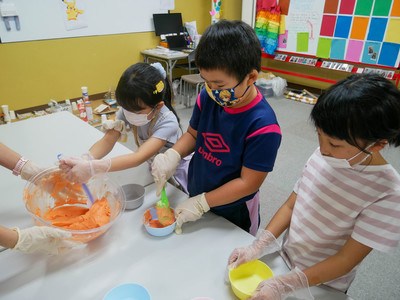 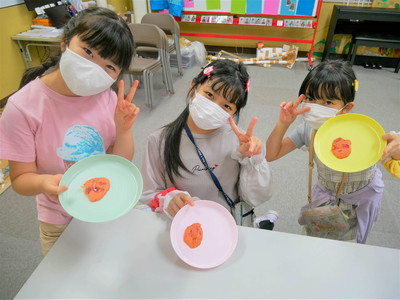 Week 8 – Savory Dish
This week the children put together their final dish – A savory pie.
The teachers prepared the ingredients ahead of time by cutting and cooking them. This reduced the necessary cooking time for the student’s part.
When the children arrived, we started by talking about their presentations and who would say what. They were a little hesitant to decide at first, so we decided to come back to it later.
The children then got ready to put together their pastries.
They opened their pastry sheets and took turns adding each of the ingredients.
While they waited for their pastries to bake, we talked more about presentations. We assigned parts and did a practice run through.
Towards the end of the lesson, after everything had cooled, the children enjoyed their tasty savory CGK Original Mystery Pie.
Lastly, the children worked on their posters for the project. 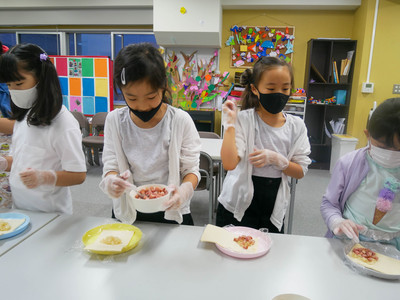 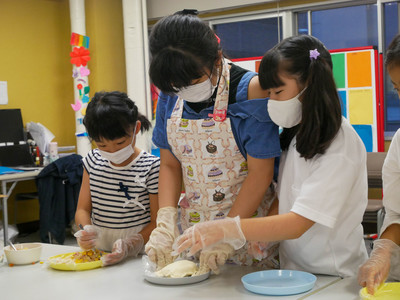 Week 9 – Presentations
The students did a great job explaining the process of this Kids Choice project, communicating clearly, and demonstrating confident presentation skills.
The students decided how they wanted to be seated for the presentation, and all agreed they wanted the tables and chairs positioned so they could see and read prompts from the projector.
Five of students challenged themselves to talk about different parts of the project without full scripts, filling in the blanks or entirely free-talking when wanting to explain. This was really impressive as we wanted the students to push themselves, and we knew they were capable of this.
One of the students felt more comfortable reading the script from the projector but did have a moment where he free-talked about his favorite part of the project.
A goal for the group would be to work towards building their confidence when free-talking during presentations, like they demonstrate during free-time as they all have the ability to do so.
Overall, the group did a fantastic job throughout this entire project, acting responsibly and sensibly when handling the cooking utensils and food, as well as coming up with an original project idea. 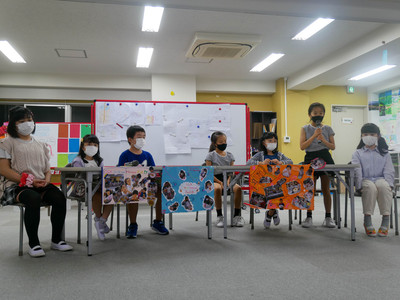 Graduated from a 4-year university in America, joined women's soccer team (National Champion).
After working in childcare and management at CGK Preschool and CGK Afterschool, she became the director of the entire CGK International School.