A Cooking Lesson by a French Chef - Carrot Pudding -

Preschool July 12, 2017
Starting the 2017 school year, we started a year long food education program.
Although, during meal time in our preschool, we teach how important food and manners are, this year's program is collaboration with a French restaurant's owner.
Through an entire year, the program is focused on being interested in food, cooking with chefs, table manners, harvesting, knowing the roles of customers and staff (servers/chefs) through role-play job training, visiting the French restaurant and enjoying meals with students and their parents in the restaurant, which is this year's goal of food education.

This time, we did a cooking lesson together with a special invited guest who were French chef and Japanese chef (they are husband and wife).
Jungle class (3-year-old class) students learned some French last week such as "Bonjour (Good morning)", "Merci (Thank you)", "C'est bon (Yummy)" and "Au voir (Good-bye)". The first meeting started with the french greeting "Bonjour".
When the French chef named Jean introduced himself in French, the students' reaction was like "he is speaking a language we don't know!". They knew that it was different because they can already recognize if a language is English or Japanese. 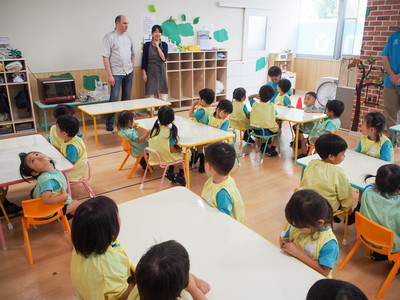 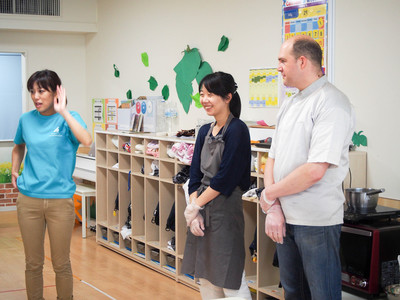 After the tasting, it was time to check the answer.
The French chef suddenly took out a carrot and the students were surprised when they saw it since they never thought that the food would be made from carrots. Before they knew it, they were enjoying themselves saying "sweet!", "yummy!". Because of this fact, I thought prejudice affects a lot. 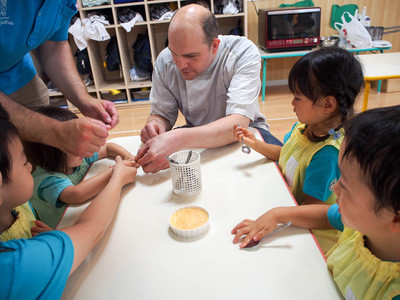 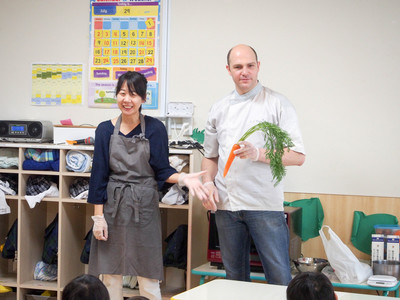 This time, the students cooked in mixed groups consisting of Jungle students (3 year olds) and Ocean students (2 year olds).
After the chefs said "because we will break eggs, decide who will do so", the students were assigned by teachers in each group and worked together.

At last, the chefs said "the reason why the liquid changed into solid is that you put in eggs".
We proved this when we saw how the pudding changed after we baked it.

In this cooking lesson, the processes of "grating carrots", "mixing eggs" and "moving things into containers" were done in Japanese and English, so the students could enjoy cooking in both languages. 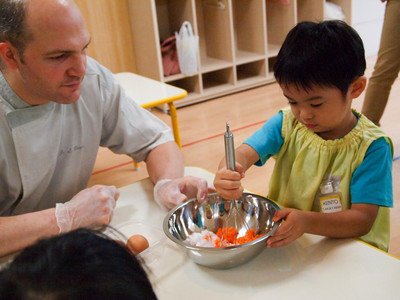 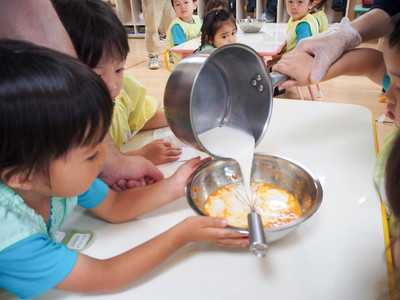 The carrot puddings they made became their snack for the day.

The puddings were very special for them because they themselves made them, and they said "yummy!" sounding like they were very happy.
As I could guess, some kids still didn't like carrots, but they at least tried to eat them because they made them. From this fact, I thought that this cooking lesson had a big meaning. 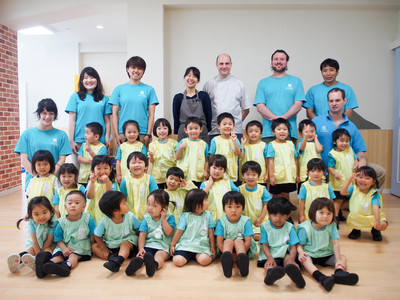 Cooking lessons are good learning opportunity as well as a good experience. They enjoy the cooking processes, but also by doing the lesson in English, they can learn many different kinds of words and expressions through activities, and the words and expressions are what they can't usually learn from normal classes.

By assigning roles, they learn sociability and communication skills too.
When they become 5 years old, they are getting to read English, and they read recipes by themselves and assign roles in cooking lessons.

From each lesson, there are many things to learn, so we will try to take advantage of each lesson and they learn as much as possible.

"Le Salon de "Légumes"
*It's close to Bashamichi station. The chef, who has built up his experience in a great hotel, cooks light French food with local vegetables.

"Le Bouquet Gami"
*It's close to Nihon Odori station. This is a casual French restaurant by the only French chef in Yokohama.