Here is an introduction to lessons at CGK Afterschool.

“How would you design a zoo?”

We followed this question with fun lessons each week that drew the student’s interest.
Here are the comments of Ms. Kitty, the teacher who was in charge of the lessons. 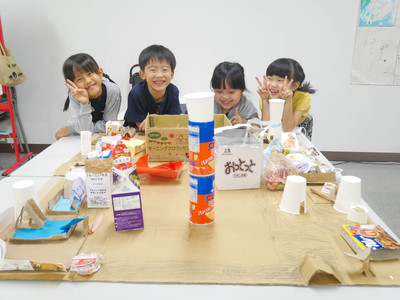 Week 1
Students were introduced to zoos around the world through a slide show and brainstormed the many positives and challenges that designing a CGK zoo would entail. The students had a fantastic discussion relating to various aspects with a heavy emphasis on animal welfare. Students articulated their opinions and preferences very well and engaged with the driving question very well. They also talked at length about what kind of special attractions they would like to see at a zoo. There was a split in the class about which way to take the project. Although many people were for the idea of making group zoos and then combining them into a large class zoo, Koushin especially argued very well, there were other people who worried about everyone`s ability to work together this way and thought people would fight. Students had a great discussion about the pros and cons of each and we decided to think about it over the week and then commit to a direction the following Tuesday. After the long discussion students worked individually on their planning booklets deciding on what kind of animals they would want in their zoo and designing a special attraction.

Week 2
The students briefly reviewed what they discussed in Week 1 and then looked through a slideshow of animals in their natural habitats next to images of animal enclosures at zoos. The students were able to comment on what they could see the animals needed (e.g. Penguin`s needing water to swim, monkeys needing to climb etc.) as well as thinking about how much space they needed. Teacher asked the students to think about different ways the visitors can view the animals, either by looking down into the enclosures, looking from the ground level or from below, and showed some images as examples. We also looked at some live camera footage of some animals in Zoos and could compare how much space they had in contrast to each other. After the group discussions, the students worked more in their planning packs and began to think about the first draft of the Zoo blueprint plan. Teacher explained the list of requirements that needed to be included in the plan and the students began to think about where the animals, shops, toilets etc. would all go.

Week 3
As a class we looked at different zoo maps to see how the animal enclosures had been arranged. The students were able to read the names of the areas and could identify similar animals in the same area (eg big cats, monkeys) as well as seeing areas zoned out by continents or similar habitats. The students were vocalizing what they did and didn`t like – a lot of them weren`t impressed by the layout of continents but more in favor of the maps that looked like the animals had more space. After talking about the maps we discussed how the class wanted to move forward with the project; we talked about the pros and cons of working on a large class zoo, and then thought about working in smaller groups – a few students were concerned about a big project leading to disagreements and arguments so they decided they wanted to work in smaller groups. We did a name roulette to decide on the working groups and they went off to discuss which 10 animals they wanted to build enclosures for in their Zoos. 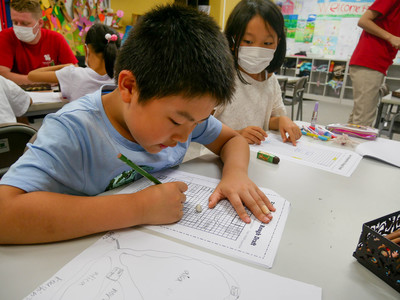 Week 4
The students were working together to decide the final layout of their zoos and thinking about the size of each enclosure, as well as making sure they included all the requirements from the list (restaurants, toilets, gift shops etc). Once they had finished their plans, they thought about which enclosures they wanted to start designing and how they would work in their groups. They were given the options to work in groups or could design individually, some chose to work on their own but most wanted to work in pairs. After drawing out their designs they thought about what materials they wanted to use and explained to a teacher how they wanted to make it. After explaining and seeking any advice/tips the students started to build things and worked well together. The groups presented their plans and work they had started making and were able to give feedback and suggestions confidently.

Week 5
The students continued to work on their animal enclosures for their Zoo`s. The students were thinking about their designs and how they can use the recycled materials from the classroom to build their spaces. They made good progress with what they were making and communicated well within their working groups. 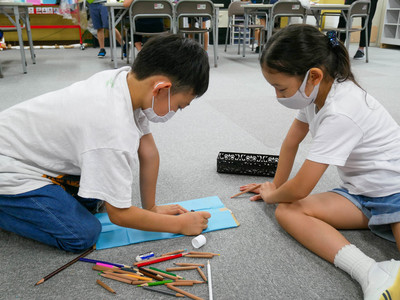 Week 6
The groups continued to work on their Zoos and were building the enclosures for different animals. Students were helping support their friends in their group with advice on how to secure things that were causing issues. A group managed to finish building their 10 animal enclosures and started to plan out the layout on their cardboard by looking at their Zoo blueprint plan. The students presented their works to the group and friends were asking questions about their pieces. 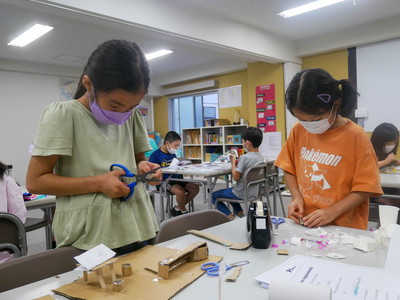 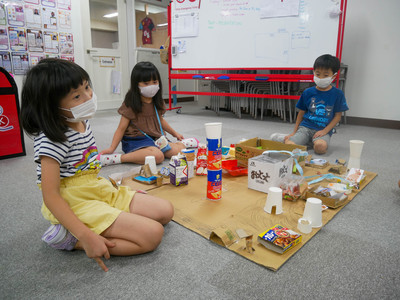 Week 7
The students were given a checklist that they needed to work through, making sure that they had built all the 10 animal enclosures. Once their 10 animal enclosures were built, they could start making things, such as gift shops, toilets and snack stands. While the groups were working on their projects, Ms Kitty was going around talking to each group and helping the students think about what they wanted to say in the final presentation. All the groups had made so much progress with their Zoos and all the students seemed to be enjoying the work.

Week 8
The final working week for the students meant everyone needed to finish making their Zoos. Two groups managed to secure everything down onto the cardboard, while one group was still making an animal enclosure and additional parts. The students presented their work and gave feedback to each other.

Week 9
The students did a great job at presenting their work for the Zoo project, speaking clearly and confidently when explaining what they made. Most of the students had strong presentation skills and could stand still while holding the microphone. 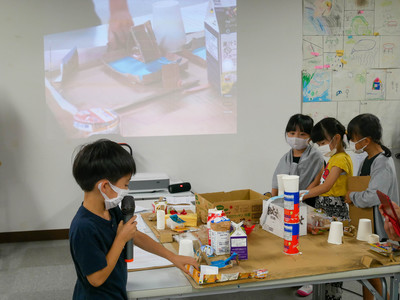 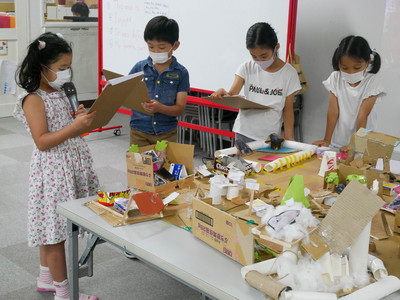