"How can we work together to create a modern storybook from scratch?"

Each project has a driving question and this project's question was "How can we work together to create a modern storybook from scratch?" Students were discussing, researching and learning with friends and teachers through this question. One project continues for three months and teachers guide lesson based on students' interests. 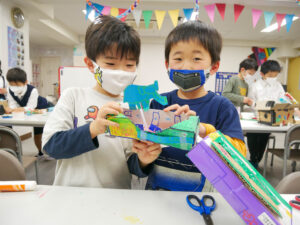 Ms. Darby introduced and explored key components of a story with students sharing their ideas and expanding on them in a free-flowing discussion. Through little guidance students were able to identify various key story elements such as characters, plot, and setting and start to build an understanding as to why they are important for any stories foundations. Students got the chance to watch a fun interactive story about dragons and tacos and discuss what they thought.

To start to build students understanding of story telling Ms. Darby played a game called `story, story, die`. In this game one student had to start telling a story they made up on the spot and without warning the storyteller would switch to someone else who then had to continue telling the story. Students needed to concentrate, listen carefully, and have a big imagination for this to work and the students did a great job inventing many fun stories and really enjoyed the activity. 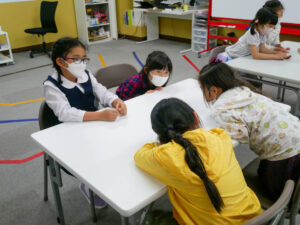 We read Dr. Seuss `Can You Read with Your Eyes Shut? ` to the students to introduce the concept of Dr. Seuss. Students had discussions with the class about aspects of the book. Students then read the Dr. Seuss book `Circus McGircus`, which is about different animals and performers in the circus. Students then talked about what each train car contained. Teacher then told students that their project today was to create their own train cars and their own characters. These reviews aspects of literature; setting and character. Students can use any materials in the classroom to make their train cars and their characters. Students did not finish by the end of the class. Instead, students presented the work they had and talked about what they needed to finish for next week. Next week students will finish their trains and complete a short story about their project.

We read Dr. Seuss `All The Places You Will Go` to the students to review the concept of Dr. Seuss. They talked about the colors, the characters, and the different aspects of the book. The students then continued their train car projects. Almost all of them were able to finish. Students worked well together and were talking a lot. Students were able to discuss their concepts and the background stories of their trains. 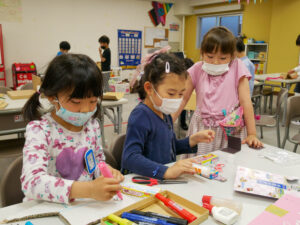 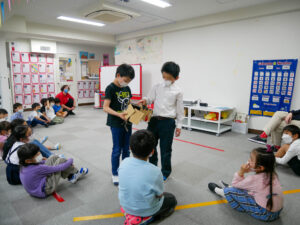 Ms. Darby read Dr. Seuss’s Fox in Socks. Then we introduced the students to flipbooks. We walked them through creating their own flip book. Then they started planning what they were going to do in their flipbook, with words, pictures, or both. The one requirement is that they need to tell a story with a beginning, middle, and end.

Ms. Darby read the students a Dr. Seuss book during circle time which didn`t really have a start, middle, or an end. Through discussion students came to the conclusion that a story like this would not work with their flip books and that they really needed to think about a flow and direction for their stories. After a chance to ask any question about the direction of their project students worked on their plans for their flip books.

This week the class was divided and Mr. Dan worked with two groups that wanted to work on creating a storybook and Ms. Darby worked with the groups that wanted to make a movie. The movie groups decide to merge into one big group and worked together with Ms. Darby to come up with and agree on a premise for their story. The focus of the class was working on the who, where, and what of their story and keeping in mind that a story needs a beginning, middle, and end.

Mr. Dan worked with the movie group to help them split their roles to work on many things at once. However, as a group first the students chose to build on their story further by adding an additional scene where the characters climb a bean stalk and discover a giant`s house. The movie team worked together so well to create the story and were really enthusiastic. After the story was decided the group decided on their roles very diplomatically. Some students worked on making puppet characters, some worked on creating dialogue, and others worked on making the settings for the story. The book teams finished their draft stories and started to work on their final piece. 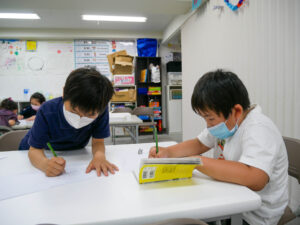 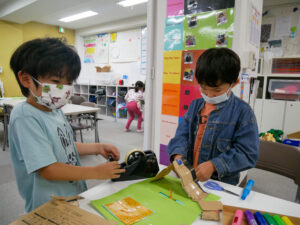 Students voted to extend project time and not have a presentation time so they could focus on getting everything ready for presentation practice week. Mr Dan worked with the movie group to divide up roles and everyone worked really well and finished everything they needed to.

The book team managed to finish with enough time to start practicing for next week’s presentation. The another book team almost finished but will finish the last pages during free time throughout the week. One student has taken a lot of pride in this book and has showed real initiative and drive to finish it over the last few weeks. On the other side of the classroom the movie team got to record their movie using an iPad and everyone worked together using the agreed dialogue but also adding extra dialogue and parts of the story where they wanted to. 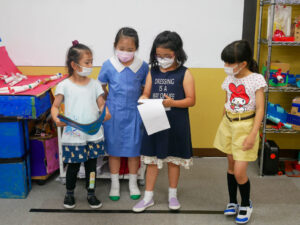 On final presentation day, all students did great job and we are so proud of them! It is great to see that each students are improving various area that they need to work on and see everyone is having fun to learn.