"Is our relationship with nature sustainable?"

Each project has a driving question and this project's question was "Is our relationship with nature sustainable?" Students were discussing, researching and learning with friends and teachers through this question. One project continues for three months and teachers guide lesson based on students' interests. 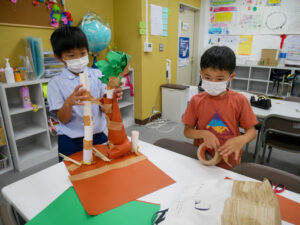 At CGK afterschool we firmly believe in the importance of raising informed global citizens that can think critically about international issues. To this end the SDGs play a major role in our projects and are at the forefront of student’s thinking. From July to September Tuesday’s driving question was, ‘Is Our Relationship With Nature Sustainable?’. The students quickly concluded that currently humanities relationship with nature is unsuitable.

After a discussion about key terminology students read the book ‘The Lorax’ together and discussed its message about sustainability. Students had a lot of opinion about the book which made for a lively discussion. Students then played a game to help show them the importance of resource management and sustainable consumption. First, students wrote down some living things such as animals or plants and put them in a box. Next students thought about what resources that living thing need to survive such as O2, Co2, sunlight, food, water, etc and wrote them down on paper that was then scattered on the table. Students the took a living thing from the box and had to walk around the classroom looking for resources. If there were enough resources, they could take them and be safe. If they couldn’t find enough resources, they would die. Students with bigger animals could also eat students with smaller animals which made the game very fun and served to highlight the interconnected nature of ecosystems. After playing once students understood the rules better and could play again, but this time in the living things bag humans were introduced. In the game humans needed to consume a lot of resources to reflect in real life just how much humans consume. The humans ended up consuming far more resources and put great stress on the ecosystem which resulted in there not being enough for the other living things. The students thought this was really unfair and it led to a big discussion about the importance of sustainability.

Students further built on their knowledge buy using research packs and ipads to research an SDG of their choosing that was relevant to the project. Students split into two teams and chose to research the SDGs life on land and life below water. Students worked together to create an information poster that they could present to the other group to share their knowledge. 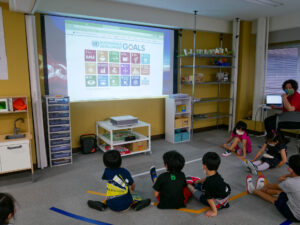 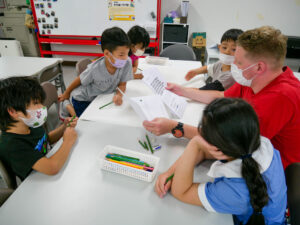 Students now has a broader understanding of the underlying issues at hand, so it was now time to relate this to their everyday lives. Students looked at nature in the classroom before going on a nature observation walk around Kannai. Students wrote down their observations on clipboards and shared with their peers in a classroom discussion.

Building on making the content relatable to them students were asked the question ‘who will be affected more if the world continues along its current unsustainable path?’ The answer they agreed on was them! Students seemed to think that even though environmental problems will affect them the most there was nothing they could do as they are only children. To demonstrate the positive global impact children can make and highlight to the students their own agency we looked at and discussed student lead protests and figures such as Greta Thunberg that have made a huge global impact. Students were then asked to think about the issues they observed around Kannai and presented with the question ‘what do you want to do about it’?

Students initially discussed a wide range of potential ideas they would like to try from trash pickups, social media campaigns, protests, to building designs. After much discussion students formed three groups all focusing on different areas of interest they had. One group noticed on google earth that the building in Kannai were not making use of their roof space and wanted to take that dead space and turn it into something that would benefit people and the planet. Their solution was a letter writing campaign where they wrote down their reasons for wanting to turn the roof of the afterschool building into a garden. Another groups panned, produced, and filmed a puppet show with a message about environmental sustainability. Another group also made a sustainability movie but incorporated a live debate element at presentation time after the audience had viewed their movie. While the final group created an original story book using Pokémon to teach people about sustainability. 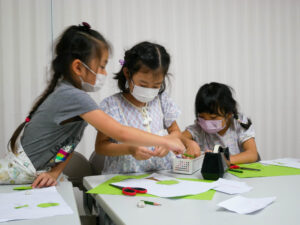 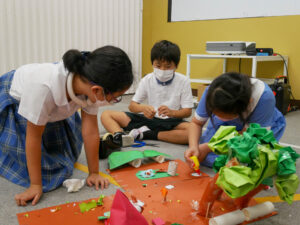 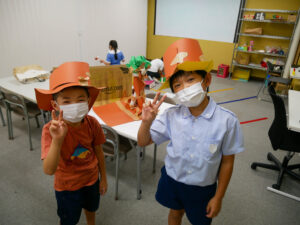 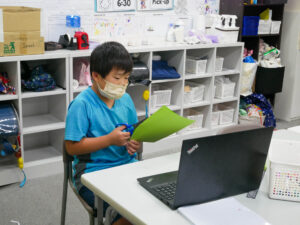 Throughout this project students showed a great amount of interest towards sustainability and dismay at how unsustainable the current status quo is. At CGK we believe in helping students to become the force for change they want to see in the world and realize their own agency.