Here is an introduction to lessons at CGK Afterschool.

“What is a TED talk and how can we use it to share our own ideas with others?”

We followed this question with fun lessons each week that drew the student's interest.
Here are the comments of Mr. Dan and Ms. Heather, the teachers who were in charge of the lessons. 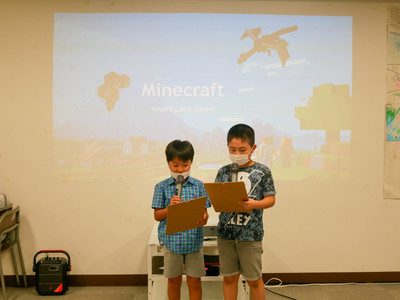 Week 1 - Dan
Students were introduced to the driving question “What is a TED Talk and how can we use it to share our ideas with people?”. Students gave their thoughts and opinions on what they thought were the key parts of the question and their ideas as to what a TED Talk is. We talked about what the word opinion means, that different people have different opinions about things, and that we can learn to understand each other’s different ideas.
We watched a few examples of TED Talks. First, we watched a few clips from a famous J-vlogger who was giving a talk about YouTube. We talked about the stage, the lighting, how he was standing, and the way he presented. Next, we watched some clips of kids TED Talks and focused again on the way they were presenting. One talk in particular, from a girl who gave a TED Talk about how it is important for children to learn from their mistakes and that parents should listen to the opinions of their children more, really got them interested. We then broke into groups to brainstorm ideas of what a TED Talk from after school students could be about. We wanted the children to focus on things that they know about and things they could share with others. For example, they go to school in Japan. Not everyone in the world goes to school in Japan, which makes them experts in this area through their experiences.

Week 2 - Heather
There was a long break between Monday classes, but the children were able to think about what they remembered related to TED Talks. They shared that a TED Talk is: sharing, talking, reading, interviewing, presenting, and listening. We discussed how there are listeners who listen to the person who is presenting/talking. And we talked about how reading and interviewing can be used to research topics.
In order to think about what makes a good presentation, we watched a bit of a TED Talk. The children identified that using a big mouth, your hands, and pictures help to make a good presentation. We then spent some time talking about good and not so good ideas for presentations. Overall, the students could understand that a good idea is one that they can talk about for 3 to 6 minutes and one in which they can share something that they know or that they can research. 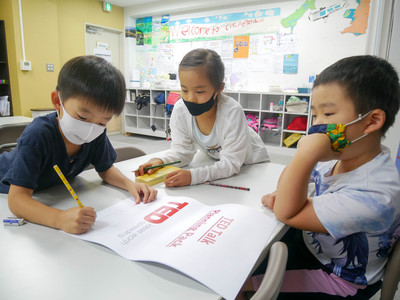 Week 3 - Dan
Today, we discussed what topics do they want to talk about and who is going to talk about what topic. A new group was created of four students. Students were given time and teachers helped to plan out and start practicing what they were going to say for their TED Talk. In presentation time it was clear which groups had worked well together and which groups had not. With only two more full weeks of working on their TED Talks, we were looking forward to students make some progress next week.

Week 4 – Heather
This week the children continued working on their TED Talks by creating clearer outlines that they can use during the presentations (rather than scripts) and determining who would say what. I will be meeting with students individually to type up the outlines and practice for their TED Talks.

Week 5 – Heather
This week we started by having the Reuse and Recycle group do a run-through of their presentation and receive feedback from their peers. Afterwards they went to revise their presentations.
After that, we split the last four teams into two groups. They did practice presentations for each other. 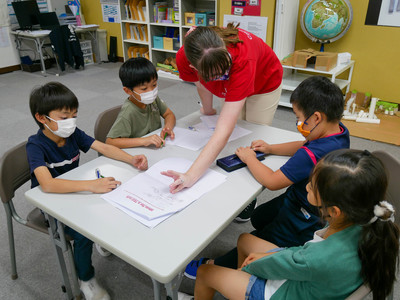 Week 6: Presentation
The children did a great job with their presentations. Many of the students demonstrated some confidence in speaking and regarding their topics. Most are still working towards honing their presentation skills, but overall, they did a great job.
The first group was the School group. They demonstrated that they were taking the time to think about what they wanted to say.
The second group was the Karate group. They worked well together and showed that they had practiced. The two demonstrated their confidence in front of their peers.
Reuse and Recycle went third. They showed an interest in their topic and they demonstrated that they understood the importance of the making use of recycled materials, using water mindfully, and not being wasteful.
Fourth was the Learning Center group. This group had changed topics towards the end of the project, but demonstrated confidence regarding the topic. They were happy to share their pictures and followed the flow as best they could.
The last group was the Minecraft group. They were able to come out with a good presentation that demonstrated their knowledge of the topic. Student was able to elaborate on the points that interested him and supported another student in writing a more detailed script prior to the final presentation. 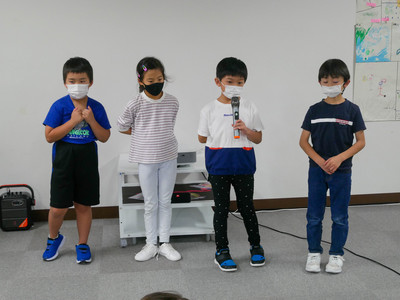 It was very difficult and challenging for the students to think of a theme, construct a presentation, practice, prepare materials, and present it on their own. Even so, with the help of the teachers, I felt the students' growth as they worked together as a group and helped their friends.
The experience of "difficulty" is also an important time for the children. I hope that the children will continue to have the experience of accomplishing a task by cooperating with their friends or by repeatedly trying.