Preschool September 7, 2017
There is nothing more popular at CGK than dinosaurs. All of the kids talk about in, and a lot of the kids know them by name. By far the most popular is the T-rex, but a lot of children also like raptors, stegosauruses, triceratops, and brachiosauruses. Before going to the Yokohama Dinosaur Exhibition, we read a couple of stories about dinosaurs and talked a lot about what they did. We learned about the size of dinosaurs, their eggs, what they ate, and what they liked and disliked. Even now the children request dinosaur songs!

Prior to actually going to the exhibition, we told everyone what we would be doing, and some friends initially showed a lot of hesitation. While most students were very excited, a few didn’t share their enthusiasm. They thought that the idea of seeing dinosaurs in real size was a bit scary, and even that dinosaurs themselves were scary. Everyone was quite brave, though, and as a couple of our teachers went beforehand to see whether or not it was too intense, we already knew that they would be able to handle it. The first thing they saw was the friendly dinosaur that was greeting everyone! (It was someone in a costume who was very good at his/her job.) They greeted him cheerfully and took a picture with him. Next, we went into the museum together (two by two) and saw a lot of dinosaur bones in the first section. The room quickly filled with children exclaiming “dinosaurs” and “look!!” While we learned the word “fossil,” most of the students in the jungle (3 year old) class simply began referring to them as “dinosaur bones!” They were seemingly hypnotized by all of the bones that were put together like the pictures they had seen. 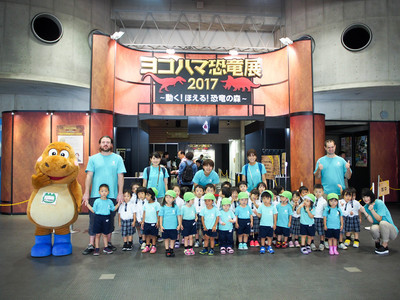 As we proceeded, the excitement grew and grew as the bones got bigger and more elaborate. Finally, we saw real Tyrannosaurus Rex and Triceratops skeletons in their entirety! We showed them the tails and told them how important it was to the dinosaurs’ movement. They saw the massive teeth of the T-rex and the fearsome horns of the Triceratops. When I asked if it was scary, all of the children agreed that it wasn’t. In this room they were able to touch bones and fossils that were separated to be touched. When I asked if the children thought that the Triceratops would like the T-rex, they quickly said that he would not, because the Triceratops would think that the T-rex is scary! They were excited to go into the next room and constantly wanted to see more! The children helped dictate the pace, as whenever we looked at something for too long they would say “next, please.” 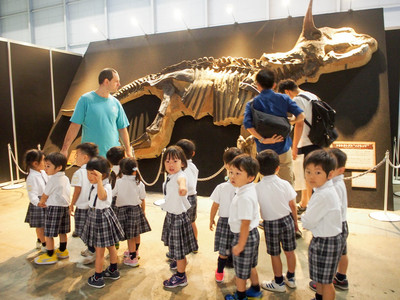 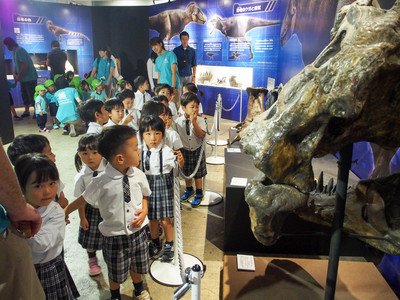 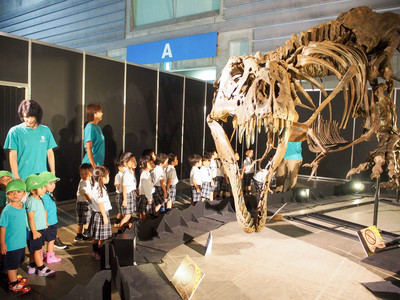 Finally, we saw the first moving dinosaur. It was a skeleton with the parts that made it move attached and visible. This was odd to them and some of the smaller children got a bit nervous (but none of our friends cried or wanted to stop). However, in the next room, they began to see more dinosaurs and relaxed a lot. Probably this because the dinosaurs were very familiar and interesting, and also because of one more important thing: many of the dinosaur robots were with their children. This personalized the dinosaurs a great deal to the children, and I could really see them start to see the dinosaurs as cute animals and not some sort of monster. They excitedly pointed out the babies, and talked about whether the adult was a mommy or a daddy if there was only one.

The teachers taught the kids a few things about dinosaurs, but we also asked a lot of questions and let them say what they knew. If I asked whether they thought the dinosaur was nice or mean, they would usually respond that plant eaters were nice and that meat eaters were mean. They liked discussing the diet, and they often said that they thought that plant eaters ate leaves or trees. Whenever they saw a small carnivore (meat eater), some of the boys seemed quite confident that they were raptors (and I must confess that I had a hard time telling them apart as well). I read the name of each dinosaur out of necessity, as the children wanted to be sure of each one’s name, and some of them were even interested in what part of the world the dinosaurs lived.

We saw many dinosaurs, but I think a few stood out to the kids. The Triceratops was especially cute as the baby seemed to be hiding behind the leaves and eating. Everyone loved the dilophosaurus because it spit water (perhaps as a subtle nod to the movie Jurassic Park, which made the dinosaur famous). Of course, everyone especially loved the T-rex, which was the last attraction and had three sizes. Some of the children thought it the largest was the daddy, the smallest was the baby, and perhaps the medium one was either the mommy or a child. 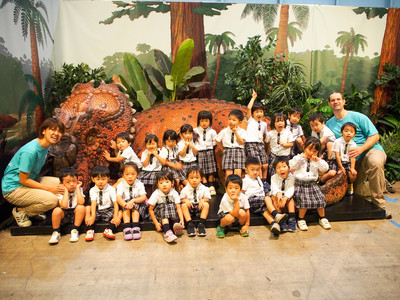 Both classes (2 year olds and 3 year olds) were quite excited and wanted to play all of the games and look at all of the toys on the way out. Although it was a very exciting day, they learned and saw so much, and when they finally got back to CGK they were ready to eat and take a nap. Even to this day, they talk about and imitate dinosaurs, and everyone has their own favorite.