October 10 is a designated day to raise awareness about visual impairment. 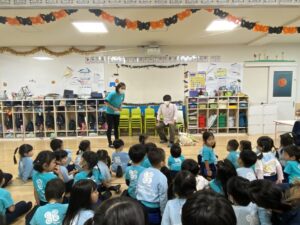 Before Mr Kuriyama’s visit, the five-year old Sky class had a lesson about visual impairment.
At first, we were thinking of activities such as eating with a fork, writing our own names, and picking up a ball, all whilst being blindfolded. But Mr Kuriyama advised us not to do these activities while blindfolded because it would scare the children.
The idea was to give the children an experience, but not to have them feel fear. Mr Kuriyama’s advice was an important reminder because the children should understand that visual impairment is not scary, but that it could be an inconvenience. 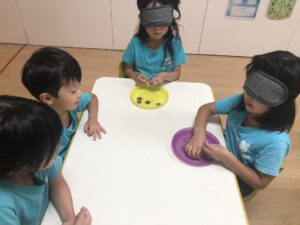 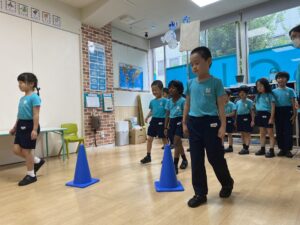 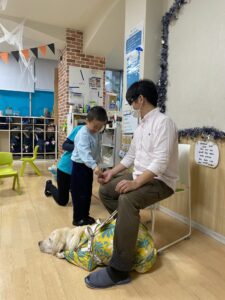 With that in mind, Sky class completed some tasks with their eyes closed: 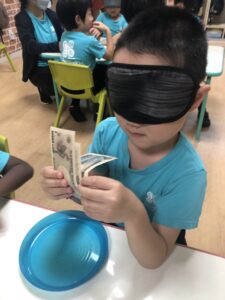 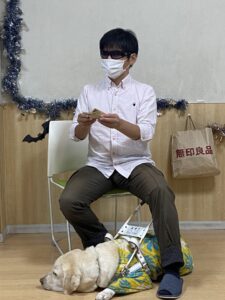 Amongst other things, Mr Kuriyama showed us how to identify money by touch. The three Japanese notes are different in size. Whilst it is difficult to distinguish the size by touch, there are some parts that are recognisable.

If the weather had been good, we would have liked to have had the children experience picking up Mr Kuriyama at the nearest station and guiding him to the school. But due to the rainy weather, we had the children guide him around our school. The children looked a little nervous, but they did their best to guide him. 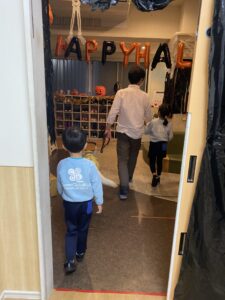 He also told us that he is currently working as a food reporter at the request of Shibuya Ward. It is part of the movement to increase diversity. Mr. Kuriyama jokingly said, "I don't really know the difference in taste." But it is very interesting to judge a restaurant's cuisine based on taste alone. In comparison, we are often bombarded by visually appealing things everywhere such as on Instagram. It gives us a moment to reflect on how our sense of sight has a great influence on us. The term "diversity" is still in its infancy in Japan, and many things have yet to be realised. It is interesting to consider how such experiences like Mr Kuriyama’s visit will affect the children’s behaviour and viewpoint, and how it will lead them in the future. 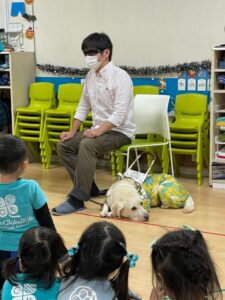 Mr Ryuta Kuriyama, and his guide dog, Angie
A blind artist, he became totally blind at the age of 11 due to an illness.
Since 2001, he has been teaching acupuncture, moxibustion, and manual therapy and other general medical care as a staff member of Yokohama Municipal Special Needs School for the Blind. He graduated from the Teacher Training Institute of Tsukuba University.

You can learn more about him here: Offcial Website of Ryuta Kuriyama